There’s A Party Coming to My City

There’s a party coming to my city!!  So yummy, so yummy!!!!  So if you don’t know by now Yo Gabba Gabba is has organized a 60-city North American tour kicking off on Friday, August 27, 2010 in Bethel, NY.  And I am beyond stoked to have the priviledge to have been selected to attend the October 17th show here in Charlotte, NC courtesy of the nice folks at the Ovens Auditorium as well as everyone else involved with the Yo Gabba Gabba Live!: There’s A Party in My City! tour sponsored by Kia Motors.  I have been a huge Yo Gabba Gabba fan for a while now.

Like seriously with all the crazy cartoons and shows on television now it’s nice to find that one show that’s truly family oriented and wholeseome for our children to watch.  For those of you who (A) don’t have cable tv, (B) don’t have children or (C) live under a rock, Yo Gabba Gabba is a show about DJ Lance Rock and his awesome friends-Brobee (the little green one), Foofa (she likes to have fun), Muno (he’s tall and friendly), Toodee (she likes to have fun) and Plex (a magic robot).  Within show DJ Lance and his friends teach children value lessons about sharing, being considerate of others and showing respect as well as the importance of practicing healthy habits like eating your veggies and washing your hands through song and dance.

Personally my favorite part of the show is Biz’s Beat of the Day and seeing what celebrity will be doing the Dancey Dance of the Day.  And it’s going to be so exciting to get to see DJ Lance and the whole Yo Gabba Gabba gang live and up close and personal.  Not to mention I’m interested in finding out what musical guest will be performing during the Super Music Friends Show segment.  I’m hoping for Fantasia or Anthony Hamilton since they both reside here in Charlotte.  Maybe, we’ll have a Carolina Panther’s player doing the Dancey Dance segment.  Speaking of football, maybe some some of you remember the Kia Motors Super Bowl ad for the 2011 Kia Sorento CUV that featured Muno (the tall one eyed orange character) from Yo Gabba Gabba.  If not check out the clip below.

It’s hard to believe that Yo Gabba Gabba the television show was launched just three seasons ago by co-creators Christian Jacobs and Scott Schultz and now it’s airing in several major countries around the globe like Israel, South Africa and the UK!!  And the Yo Gabba Gabba Live tour series was successfully launched in November 2009.  It became a major hit selling out in major cities and attracting celeb families such as Snoop Dogg, super model Heidi Klum, Brooke Shields and many more.

I just want to encourage all of you to grab tickets to the closest show near you before tickets are sold out.  This year $1 from every ticket purchased will be donated to the Habitat for Humanity local affiliate in your tour city.  It’s the best of both worlds people. A wholesome concert that the whole family can enjoy and you’re helping out needy families at the same time.

VIP packages will be available for those parents and families interested in meeting the cast and getting photos.  To purchase tickets you can visit the Official Yo Gabba Gabba Live website.  And don’t forget to you and the family can tune into Yo Gabba Gabba seven days a week on Nick Jr. 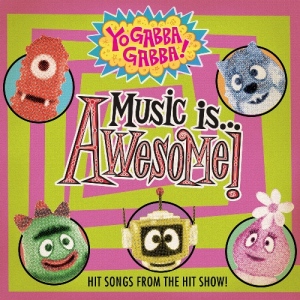 One ‘Yo Gabba Gabba!: Music is Awesome Volume 1 CD which features hit songs from all three seasons by artists like the Roots, Shins and more. Volume 2 is set to be released later on this August.  So keep a look out for it.

One ‘Yo Gabba Gabba!: Clubhouse’ DVD with performances from Erykah Badu, The Killlers and more.