Family Night In The City

Happy Monday!  This weekend the kids and I joined my mom, baby sister, and niece for a family night in the city.  After an emotionally draining couple of days, this was just what we all needed.  Here’s a recap of what we did.

We continued our family tradition of attending the Southern Christmas Show in Charlotte.  It’s something we started last year and hope to keep this tradition going for years to come.  Unfortunately, my brother couldn’t join us this year.  We definitely missed him and look forward to having him accompany us next year.
One thing that was very noticeable to all of us this year was how much smaller the crowd was.  We went on the same day and around the same time that we went last year.  There was definitely a lot fewer parents with their children in tow.  In my personal opinion, this was due to the kidnapping attempts that happened at last year’s show.
Sex trafficking has increasingly become a big issue in Charlotte over the last couple of years.  And these criminals are getting bolder it seems with coming to events and trying to kidnap kids and teens right in front of parents and onlookers.  Thankfully this year’s show was kidnapping incident-free.  There also seemed to not be as many vendors this year either.

One thing that was new (for us) this year was the train village display.  Y’all already know, my little guy was head over heels excited when he saw it.  Trains are his life.  Plus they had a Thomas the Tank Engine on one of the tracks.  That just sealed the deal for him and he could have probably spent the rest of night in that one area watching the train go around the track for forever. 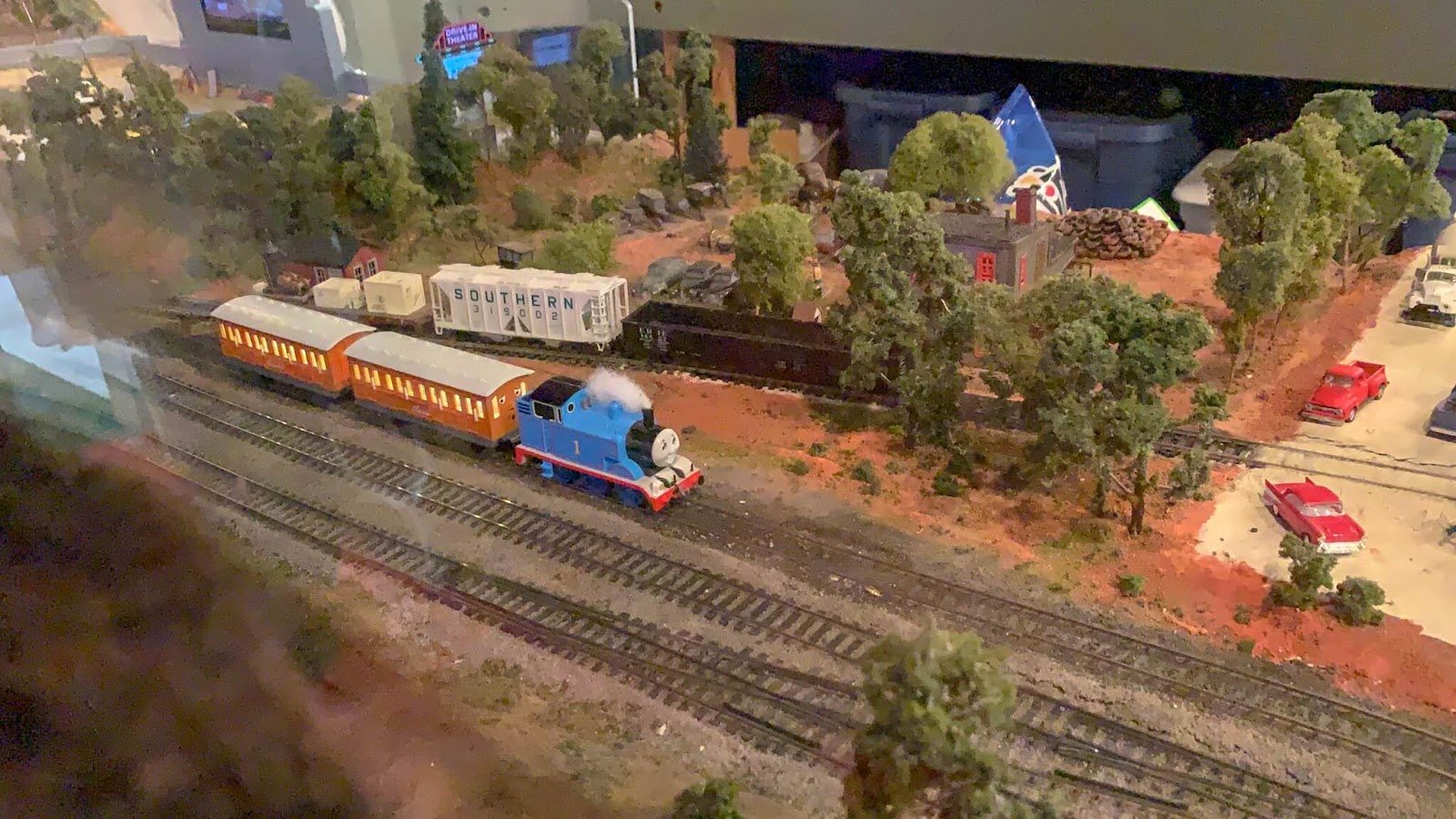 He had his own personal Thomas the Tank Engine Track Master train in tow.  Check out our vlog below to see and hear his excitement as well get a look at the train village.  Now he wasn’t the only one who fell in love with the train village.  My mom did too!  She’s a Thomas and train lover as well.

It was no surprise that she chatted up the display owners.  They told her all about their train museum in Spencer, NC and how they do Day Out With Thomas every year.  So we’ve added a trip to the museum and the Thomas event to our calendars for next year.  Can’t wait to see her and JJ bonding more over their love of trains (and Thomas).

My favorite part of the Southern Christmas Show was looking at all of the Christmas trees and ornaments.  I found a tree that was decked out in Coca-Cola ornaments and fell in love.  Now I want to put a Coke themed tree in my office next year.  You have to admit their brand colors are perfect Christmas colors.

There were also some football/sports ornaments that caught my eye as well.   My older sister would have loved the Carolina Panthers tree.

And I debated picking up this cute New England Patriots train driven by Rudolph. 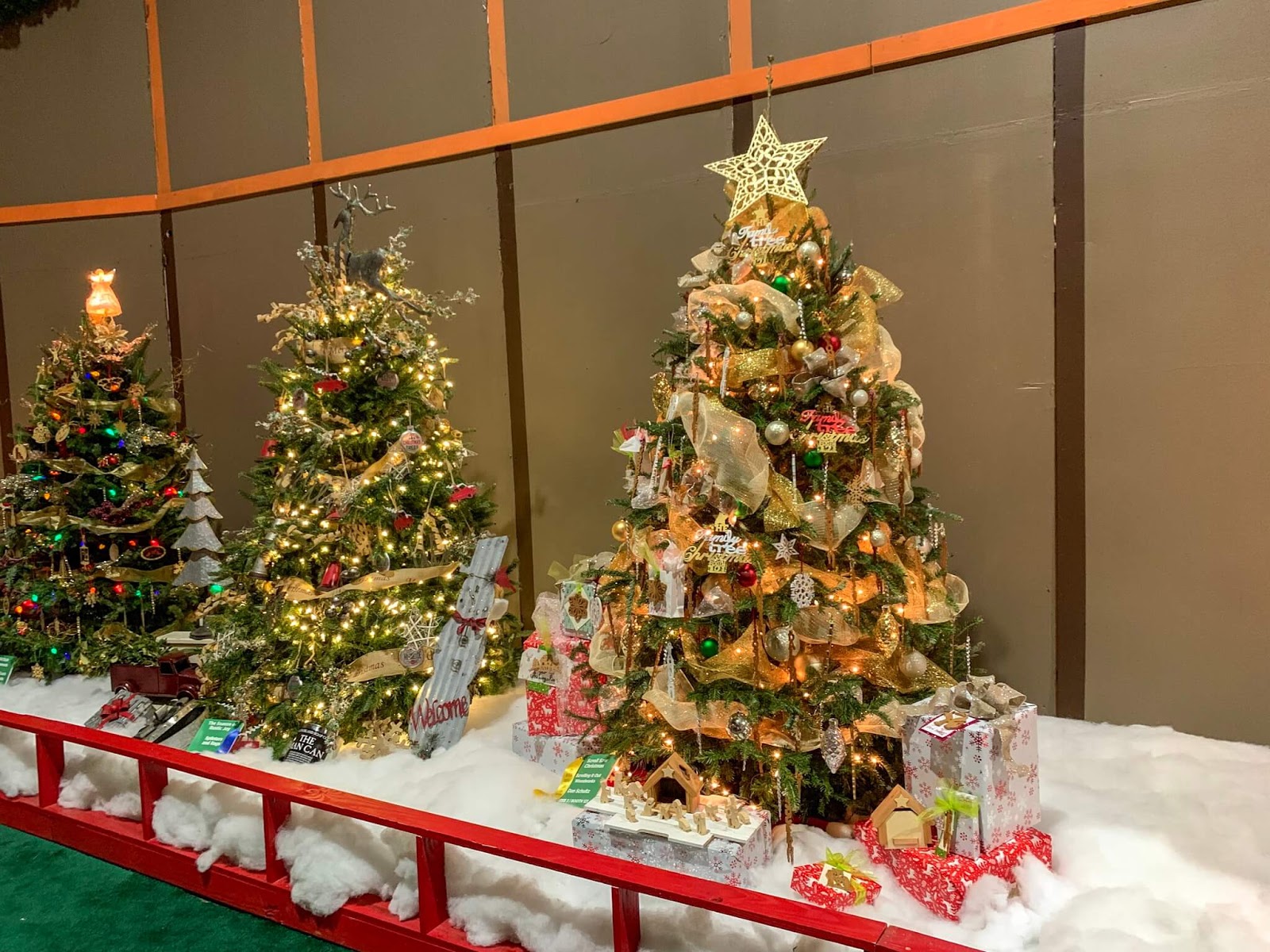 Also, where are folks getting these spinning trees?  All of the trees spun and now I need 2 of them by next Christmas.  I mean whoever invented the spinning Christmas tree was a genius.  We decorate our entire tree but the ornaments in the back hardly get any spotlight/admiration because most of us put our trees in corners or with one side falling a wall.  With a spinning tree, you get to admire all sides equally. 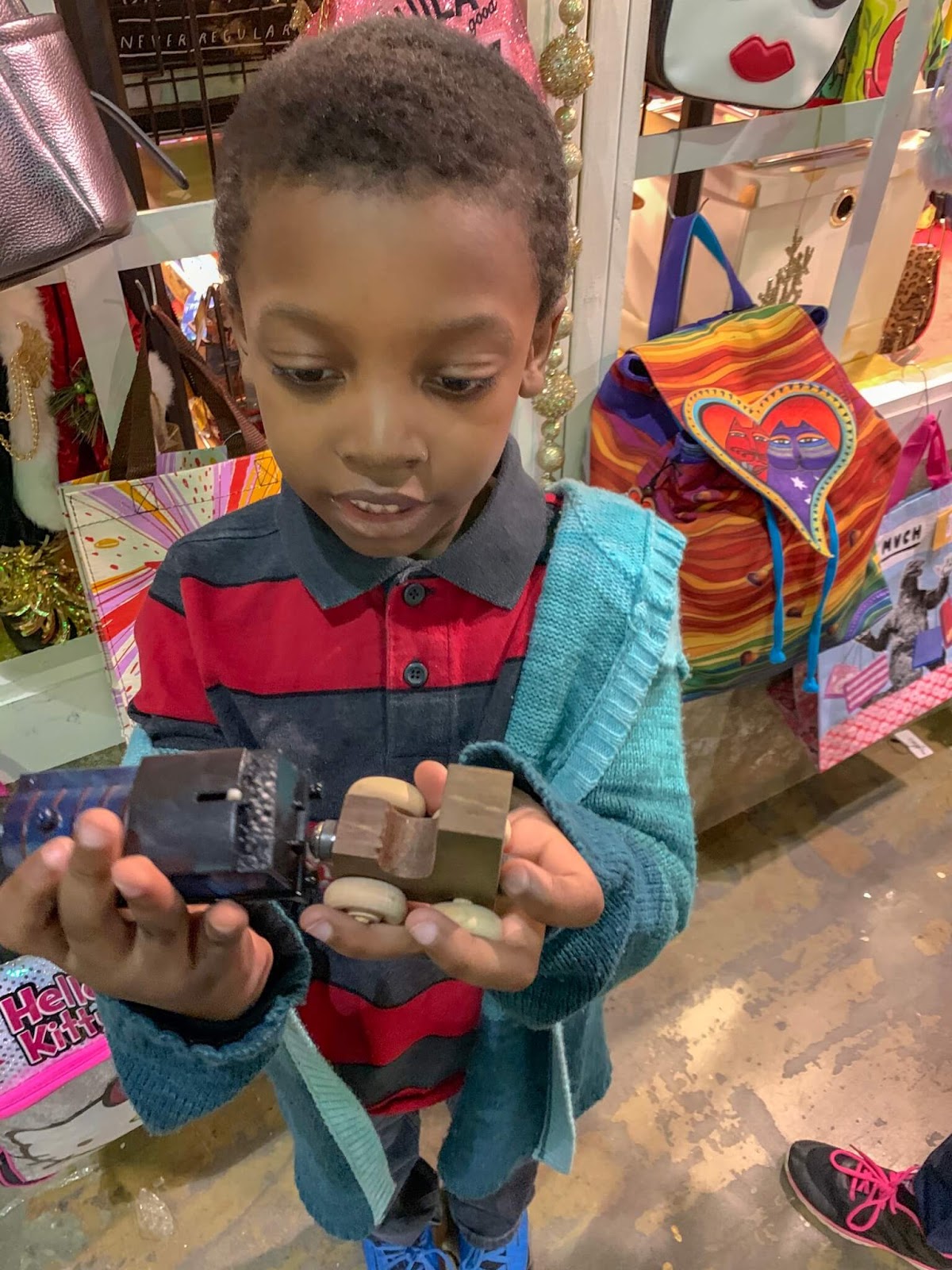 Enough about spinning trees, my sister started the tradition of gifting JJ these magnetic wooden trains from Sniders Stocks.  We were happy to see him there again this year.  Last year she got him an engine and the initial of his first name.  This year I picked up the initial for his middle name and she got him the initial for our last name.  Next year we’re getting him a caboose and then the letters to spell out his entire first name.  The trains all under $5 with tax.

We sampled more wine from Duplin Winery‘s booth.  I can highly recommend their Carolina Red, Sangria White (available for cheaper at Walmart),  and Jolly Juice Sweetzer Mix.  Then we hit up the booth of our favorite holiday treat shop, Southern Supreme Fruitcake & More.   I recommend trying their fruitcake and Chocolate Creamy Pecan Pralines.

For a few months now, I had been telling JJ that we were going to get him his first bear from Build-A-Bear.  We were supposed to go for his birthday but didn’t make it.  Then we missed the day that Build-A-Bear was letting pay their age.  But then last week, I opened up my email and Build-A-Bear had sent him a coupon for a free bear under x-amount of dollars or I could apply that dollar amount as a discount to a more expensive bear.

So we couldn’t get his first choice which was the Thomas and Friends bear.  I had set aside a certain amount of cash for this trip and I stuck to my guns of not going over that amount.  No worries, he ended up with the bear we were go originally going to get on his birthday, Birthday Treat Bear.  Birthday Treat Bear has since been renamed Jingles.

We’ll be doing a quick vlog later on this week about Jingles and how he got his name.  We’re also planning on going back to pick up Thomas Bear so that Jingles can have some company.  As far as the experience itself, I think my little was so excited but super nervous at the same time.

He’s a not a fan of interacting with strangers (or people in general outside of our immediate family circle).  So, as you’ll see in the video, he kept looking back to check and see if I was still nearby.  Also, the stuffing machine was a little louder than he expected it to be.  We’ve come a long way with his sensitivity to certain sounds.  Overall, he loved the experience and left the store with the biggest smile.

Jingles was his whole talk the entire ride back home.  And the sales associate that helped us was very nice and patient.  Hopefully, she’ll be there when we go back.

Of course, we couldn’t pass up the opportunity to go to the bookstore.  I wanted to get the Barnes & Noble exclusive edition of Kingdom of Ash by Sarah J Maas, but ALL their copies had damaged covers.  Like what the crap B&N?!!

I had heard and saw videos from two other booktubers about how their B&Ns had damaged book covers for this book, but for some reason, I thought it was just the shipment to their stores since they’re in Texas, but looks like Carolina B&N stores got jacked up copies as well.  Not cool at all.

Overall we had a blast.  Everyone pretty much went to sleep as soon as our heads hit our pillows when we got back home.

Well, I’m off to hunt down some last minute ingredients for my turkey brine, spice rub, and glaze.  Don’t forget to move those turkeys over to the frig so you don’t have a still frozen turkey come Thursday.

What did your family do this weekend?  Let’s chat in the comments!