Happy Monday!  I hope everyone had a great weekend.  It was cold and rainy here, but it gave me an excuse to get in the kitchen with the kiddies and do some baking.  Yep, JJ joined us this time around and he had a blast.  His favorite part was stirring the batter for our muffins.  Looking forward to spending more time with him joining Moo and I in the kitchen now. 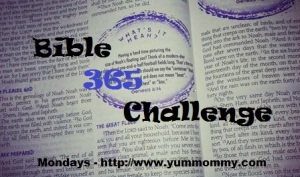 Well, just three weeks left and I will have officially completed the Bible in a year!  I am so proud if myself and if you followed along, you should be proud  of yourself too.  This week we learn that Paul has been locked up for preaching the gospel in his letters to his church families.  It’s crazy seeing how religious freedom was such a foreign thing back then.  I couldn’t imagine getting locked up now days for talking about my faith.

I amazed though at how upbeat Paul was in letters even though he was writing them from a jail cell.  Just goes to show you life is all about keeping a positive attitude, especially during our rainy seasons.  Here are a few of my favorite verses from Week 49 below.

“Similarly, encourage the young men to be self controlled.  In everything set them an example by doing what is good” (Titus 2:6-7).  I grew up in a family of mostly males cousins.  My mom has the most girls. And one thing that always got me fired up was how there seemed to be a double standard between us girls and the boys.  It was like everyone expected us to prim and proper all the time but the guys could do whatever they wanted and weren’t expected to have self control.

Well, as a mom of a boy and a girl, I for one will be practicing Titus 2:6-7 in my household.  There will be no double standards here.  Whatever I expect of Moo will be expected of JJ.  I don’t want them growing up feeling how I felt in my childhood.  I have a brother and at times my mom made it very obvious that he got treated differently because he was a boy.  Part of that came from how she was raised and the other half because it was always her desire to have a boy and I guess after having had three girls, she probably thought having a boy wasn’t in the cards for her.

You the saying “three strikes you’re out?”  Well, Titus 3:10 says, “Warn a divisive person once, and then warn them a second time. After that, have nothing to do with them.”  Fool me once shame on you, try to fool me twice and you won’t get a third time.  Some people know right from wrong but remain determined to live the wrong lifestyle.  Those kind of people you have to leave.to themselves.  So, it’s two strikes and you’re out for me.

I was asked once by a frustrated friend, how could Jesus possibly know the pains we go through in life?  To that I have to say read Hebrews 2:18: “Because he himself suffered when he was tempted, he is able to help those who are being tempted.”  A lot of times, we assume Jesus didn’t know what it was like to be human like us because he was sinless and the son of God.  That couldn’t be further from the truth.  If anybody knows about suffering and temptation it would be him.  You had the devil and high priests purposefully setting traps to trip him up.  And you don’t think after seeing how appreciative the people where that he wasn’t tempted to tell God to save him from the cross and just let them perish?  Compared to what he went through, a lot of have it easy.

“Therefore he is able to save completely those who come to God through him, because he always lives to intercede for them” (Hebrews 7:25).  Jesus has our backs.  The fact that he is willing to intercede on behalf so that we may have salvation says a lot.   However, “If we deliberately keep on sinning after we have received the knowledge of the truth, no sacrifice for sins is left, but only a fearful expectation of judgment and of raging fire that will consume the enemies of God” (Hebrews 10:26-27).

Some of us thing that we have all the time in the world to get our lives together.  We’ve fooled ourselves into thinking that we’ll have time to get right later but if I have learned anything it’s that tomorrow is not promised to us.  Being content to deliberately go against what has been defined as the right way to is a good way to end up on the wrong side of the Pearly Gates!   So always put your best foot forward, be kind to others by loving your neighbor as yourself and stay in prayer.