So, my lovely blogger friend, Amber, over that The Yeyo Diaries came up with the idea of doing a Wedding Day Romance Wednesday post every week. The purpose of these posts are to “ celebrate the reasons that made us fall in love in the first place…all the time – not just on our anniversary!” 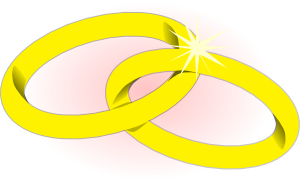 Nobody knows better than I do the importance of celebrating the reasons you fell in love with your spouse than I  do.  In fact, at one point my husband and I almost didn’t make it to becoming husband and wife because I did forget.  As a child, I lived in a house with a very affectionate mother and a not so affectionate father.  Yes, I saw my parents kiss before and on rare occasions I would witness my dad flirting with my mom. However, those points were short lived and often interrupted by outbursts from dad over his unhappiness with the situation life had dealt him-a wife and a five kids.

And eventually, he just left.  As a result I ended up being this super guarded young woman who was afraid to really let anyone in.  I was dying on the inside for affection but had no clue how to go about getting it the right way.  Thus, this made for many rocky moments in my relationship with my husband.  In fact, our relationship got so rocky because of my inability to allow myself to show or accept affection that we ended up going our separate ways before Moo’s first birthday.

Things got really ugly before they got better.  February 2010, I lost one of the most important people in my life-my aunt.  She was for all sense and purposes my second mom.  She was the one person I could always be myself with and not be afraid of being judged.  Sitting at my mom’s computer typing up her biography to go into in her obituary for the funeral, I got a text my husband (my then ex).

He was checking in to see how I was holding up.  The previous summer he had seen how I melted down at the hospital that awful night she coded blue and we weren’t sure the doctors could revive her.  It was him who called out from work to stay with me and my entire family in the waiting room almost until midnight.  It was him who curled up with me that night when we got back home and tried to reassure me that everything would be ok.

And almost everyday afterwards, he would come home and ask if there was any improvement in her condition.  This man was wonderful and I had let one simple argument and my inability to let my guard down ruin our then four year relationship.  We’d survived larger fights and obstacles before.  So, how could something so stupid and small cause us to part ways for a whole year and do and say some truly awful things about each other?

It was in that moment of texting him that I realized why I fell in love with him.  He reminded me of my aunt.  From the beginning of our relationship, I had felt such a comfort whenever I was with him.  The reason why was because like my aunt he accepted me for who I was and didn’t judge me.  He always made sure to let me know that he loved me for me and that my beauty was just an added bonus.

And somehow I knew he was telling the truth.  Having grown up in foster care and being raised by his late great uncle and great grandmother, you would think he would be the one with the affection issues. That’s how I knew he must really see something special in me because all his life women has disappointed him and screwed him over yet here he was taking a chance on forever with me.

Long story short, that night before my aunt’s funeral I realized that I was about to pass up on someone great.  And I knew I couldn’t live with myself if I did.  My aunt had taught me about forgiveness and that when it came to love we had decide whether it was or wasn’t worth doing.  Well, our love was worth moving past everything that had happened and letting the past be the past.

I’m happy to say that we have been together coming up on 7 years and are approaching our first anniversary as husband and wife.  Neither of us regrets the choice to get back together and make the ultimate commitment.  If anything the reminder of what attracted me to him has made us so much stronger this time around.  I’m sure that we will have more obstacles and battles to face but I know that we will emerge from the victoriously.