There’s nothing like rediscovering an old favorite.  Whether it’s stumbling across a fragrance you thought had been discontinued, finding your old ‘skinny’ jeans stashed at the top of your closet or a making a dish you enjoyed as a child it’s hard to resist those things we once clung to almost religiously.  Well, last month I rediscovered an old favorite tv show, The Vampire Diaries.  My baby sister and I used to watch the show every week like our lives depended on it.
So, what happened?  Well, I kind of went on a CW strike after they didn’t bring The Game back for a third season.  They said it was because of ratings but I wasn’t buying it.  It’s been years since The CW has been on my tv.  But thanks to Netflix and The CW app, I am officially rehooked on the drama surrounding Elena and the Salvatore brothers, Damon and Stefen. 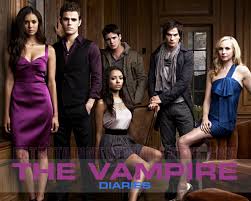 Like OMG!  I missed out on so much.  Like Elena finding out she was adopted, her uncle John was really her biological father and her mother was vampire and her aunt’s boyfriend’s supposedly dead wife.  Yes, that is a lot!  And Carolyn got turned into a vampire and started dating Tyler who’s also a werewolf.
I’ve been staying up late to catch up on the past seasons before the one starts tomorrow.  My mind is totally blown.  Looks like there are still a few great scripted shows still out there.  And while we’re on the subject of The CW, did anyone watch the pilot for The Carrie Diaries on Monday?  I watched it last night online and I think I’m going to like it. 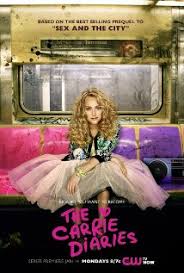 If you’re a fan of Sex & the City, then you might like The Carrie Diaries.  The show is about how the young, teenage Carrie Bradshaw became the fabulous Manolo obsessed adult writer Carrie Bradshaw we all admired and loved in the HBO series.  It’s also based on the book, The Carrie Diaries by Candace Bushnell.  I think The CW is growing on me again!  Hmm…. I wonder what other old favorites, I should rediscover?
What old favorites have you fallen in love with again?
Next PostThankful Thursday
Previous Post3 Years And Growing