This giveaway is sponsored by Illumination Entertainment.

“Welcome to New York.  It’s been waiting for you.”  It’s been three years since we’ve hit the streets of the Big Apple with our favorite pet pals.  Now The Secret Life Of Pets 2 is adventuring into theaters on June 7th just in time to kickoff Summer Break!  Here’s a look at why the kids and I are beyond excited to catch up with Max and the gang.

1- Big Changes | If you’ve seen the movie trailers for The Secret Life Of Pets 2 already, then you know some big changes have happened since the last time we got to hang out with Max and the other pets.  The biggest changes by far (in my opinion at least) are that Katie, Max and Duke’s owner, got married and had a kid, Liam!  Talk about a plot twist.

Keep in mind that one thing we know about Max is that he doesn’t respond well to changes, especially when it pertains to his pack/family.  The main questions the kids having been asking is, “Do you think Max is going to like the baby?”  I’m going to go out on a limb and say that he will, but we won’t know for sure for sure until we see the movie.

2- The Gang’s All Here | It’s nice to know that while we’ll be seeing how Max adjusts to being a big brother for second time, that we’ll also get to see some familiar faces from the first movie.  Yep, Chloe, Snowball, Mel, Duke, and Gidget are back.  They’ll have adventures of their own to tackle too. 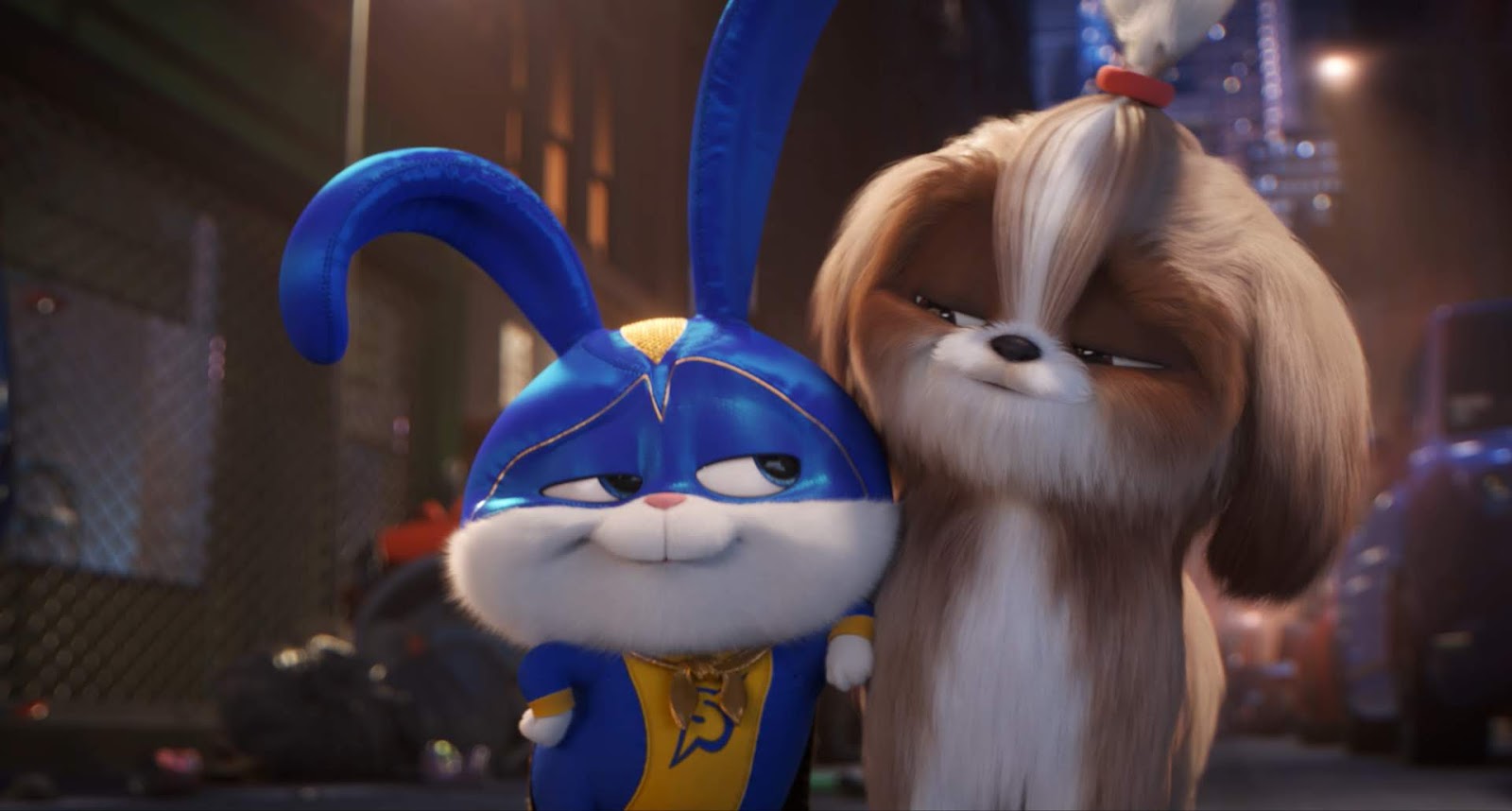 3- New Faces | While it’ll be great seeing familiar faces, there will also be some new faces joining the The Secret Life Of Pets family.  Two of the new faces we’ll meet are Daisy, a fearless Shih Tzu, and Rooster, a farm dog.  I think Rooster is either a Border Collie or Australian Shepherd, but don’t hold me to that.  Anyways, we’re eager to see if these new characters will be friends or foes.
4- Allstar Voice-Over Cast |  When it comes the voice-over cast, I’m sure that I’m more excited than the kids are.  I love it when some of my favorite actors are a part of projects that are family-friendly.  The Secret Life Of Pets 2 is welcoming the talented and funny Tiffany Haddish as the voice of Daisy the Shih Tzu as well as Harrison Ford, my forever man crush, as the voice of Rooster.   And of course, Kevin Hart, Patton Oswalt, Ellie Kemper, Lake Bell, and Jenny Slate are all back voicing their original characters.

5- Overall Theme/Messaging | At the end of the day, I’m most excited to see what themes and messaging this movie will touch upon.  I know the first movie gave way to a lot of conversation starters for us.  My kids really pick up on things in animated movies that honestly, I don’t always expect them to.  For example, in the first movie when Duke went back to his old home and the cat told him that his owner had died, my kids started asking questions about what would happen our stuff and them if I died.  They also asked questions about why there are so many stray animals.
So I’m looking forward to seeing what themes and messages they will pick up on in this movie.  I know for sure The Secret Life Of Pets 2 will touch on changes in family dynamics (again) as well as friendship (again).  I suspect we’ll see more of the pets having to confront their fears and overcome other obstacles.  Either way, I definitely feel confident that we’ll be having some good conservations after watching this.

I really hope that you and your family will have the opportunity to watch The Secret Life Of Pets 2 when it hits theaters on June 7th.  Speaking of opportunities, I’m proud to announce that I’ve partnered with Illumination Entertainment to give a few families in the Charlotte, NC a chance to attend an advance screening of the movie on June 4th.  Simply use the widget below to enter.