Journeying Through Motherhood & Beyond

April 22, 2019
Happy Belated Easter!!  After almost two weeks of being on house arrest thanks to the insane amount of the pollen that has been suffocating the Carolinas, we finally made a break for it and journeyed outside.  This past weekend, I loaded up the kids and we went into downtown Lancaster for the annual Rosie’s Easter Bash community event.

This was our second year going.  The weather was less than stellar because we had series of really crazy thunderstorms the day before and it was actually really cold the morning of the event.  Nevertheless we still lived our best lives and had a great time at Rosie’s Easter Bash 2019.  Take a look at some of our adventures below. 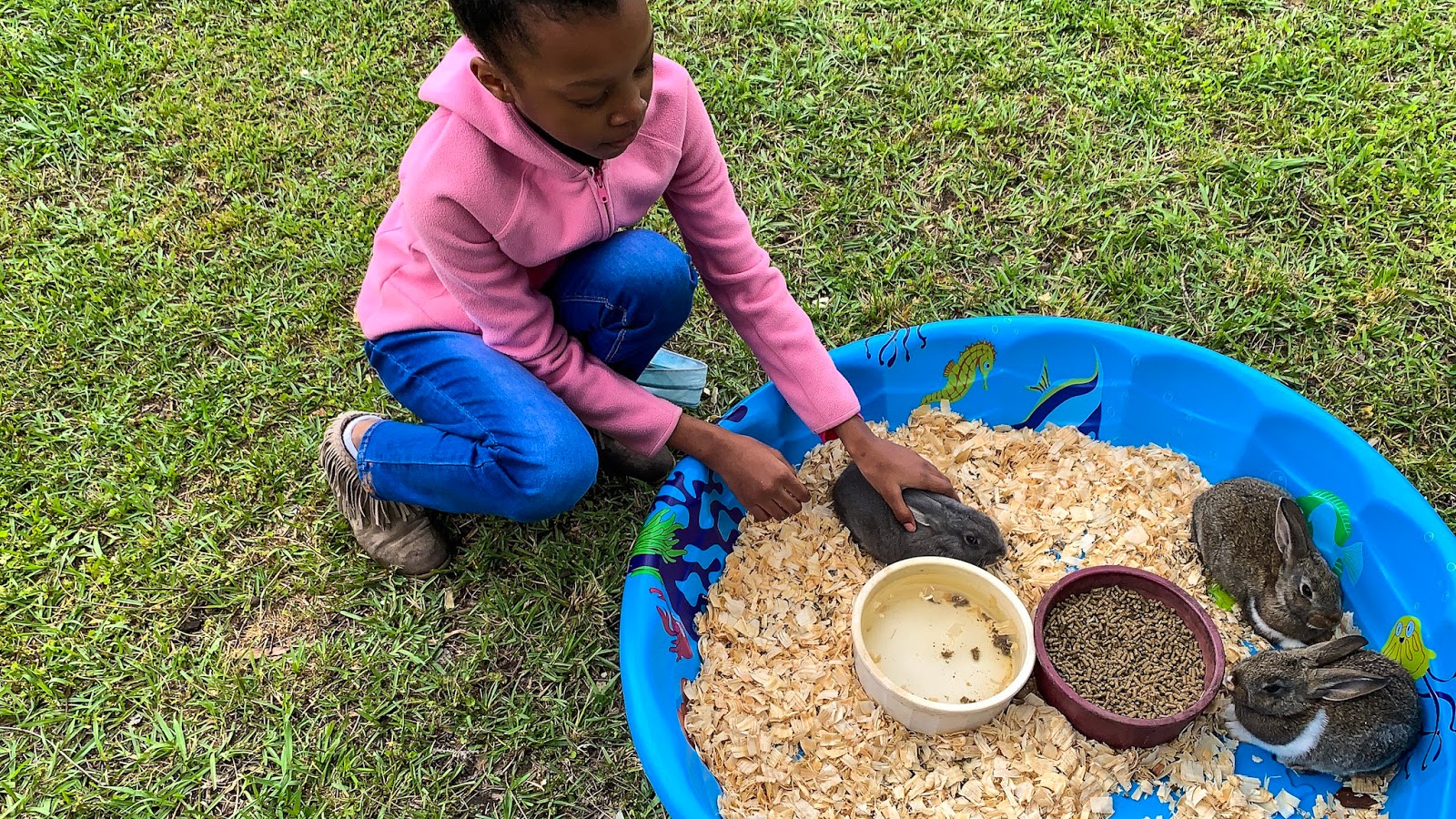 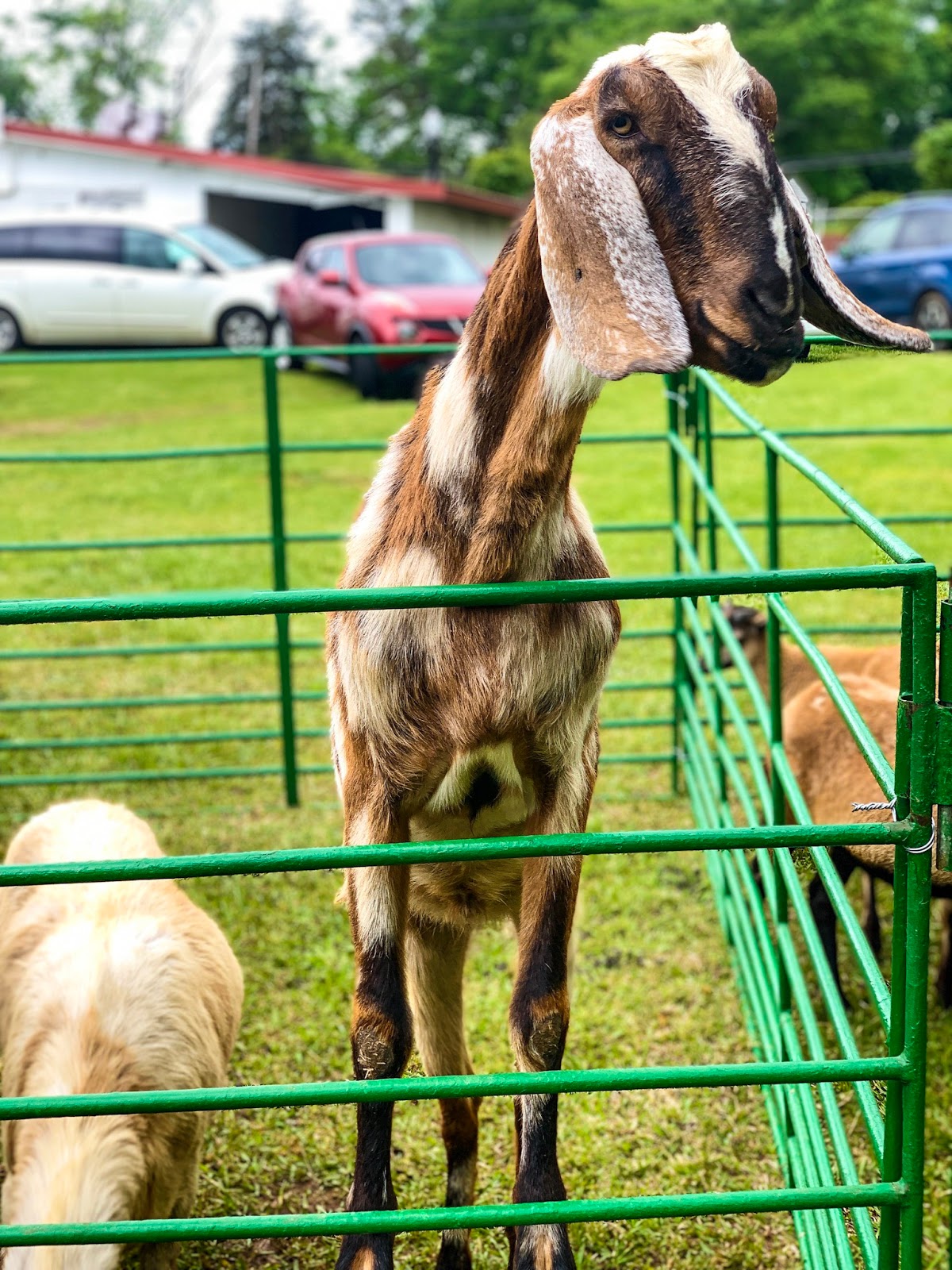 I fell in love with this one goat that I named Billie (pictured above).  I’m not sure if it’s a he or a she but it was so cute and friendly.  Billie greeted everyone that passed by and enjoyed being in the spotlight.  Also, like last year one of the alpacas was not thrilled or amused by us humans and tried its hardest to eat through the fence bars.  Watch my vlog below because I got its attempted breakout on camera. 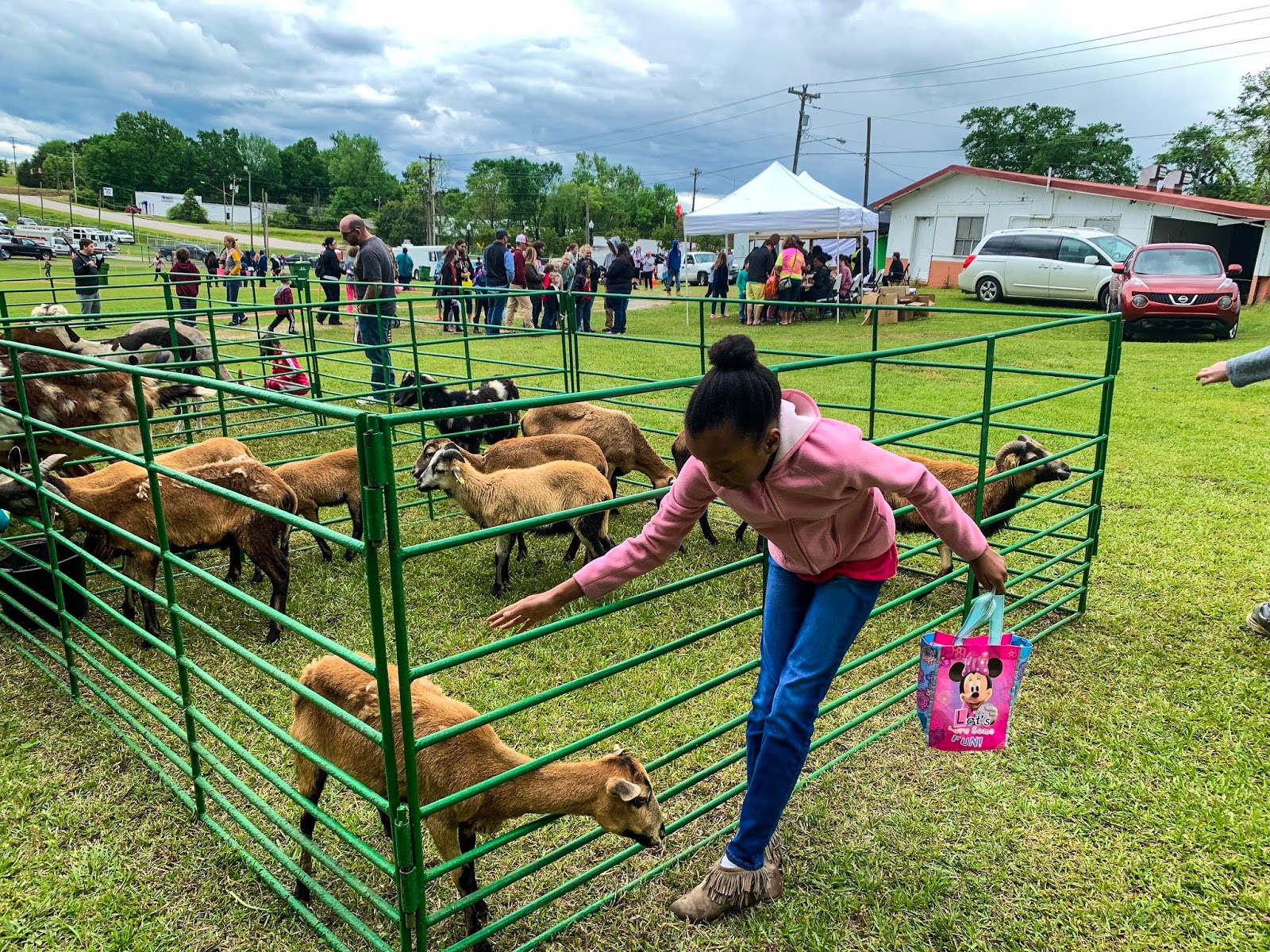 We did miss the sheep this year.  They were replaced with Billie’s crew but the baby/miniature goats were back again this year.  And just like last year, Moo tried to talk me into talking the farmer into letting us take one home. LOL.  The country is finally growing on my city girl and it has done wonders for bringing out her animal lover side.
Now if we could just get the country to work its magic on my little guy.  So far the only animals he gets remotely excited about are birds and horses.  Like he loves horses a lot. 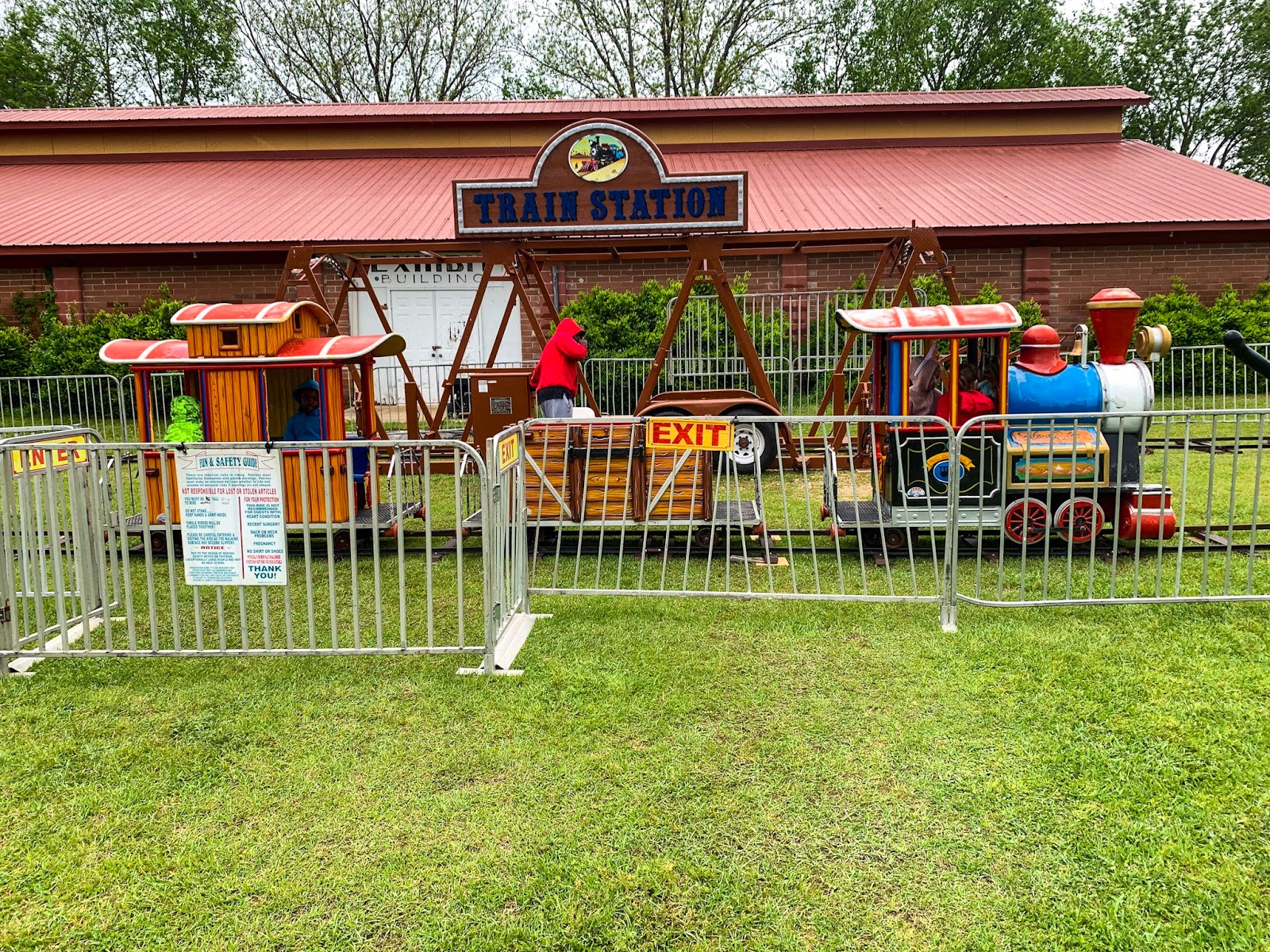 So we were both happy to see the “Train Station” roller coaster ride.  The “conductor” was very nice and did a great job of interacting with the kids.  As you’ll see in the vlog, he hoped on and off the train with the kids several times throughout their ride around the tracks. 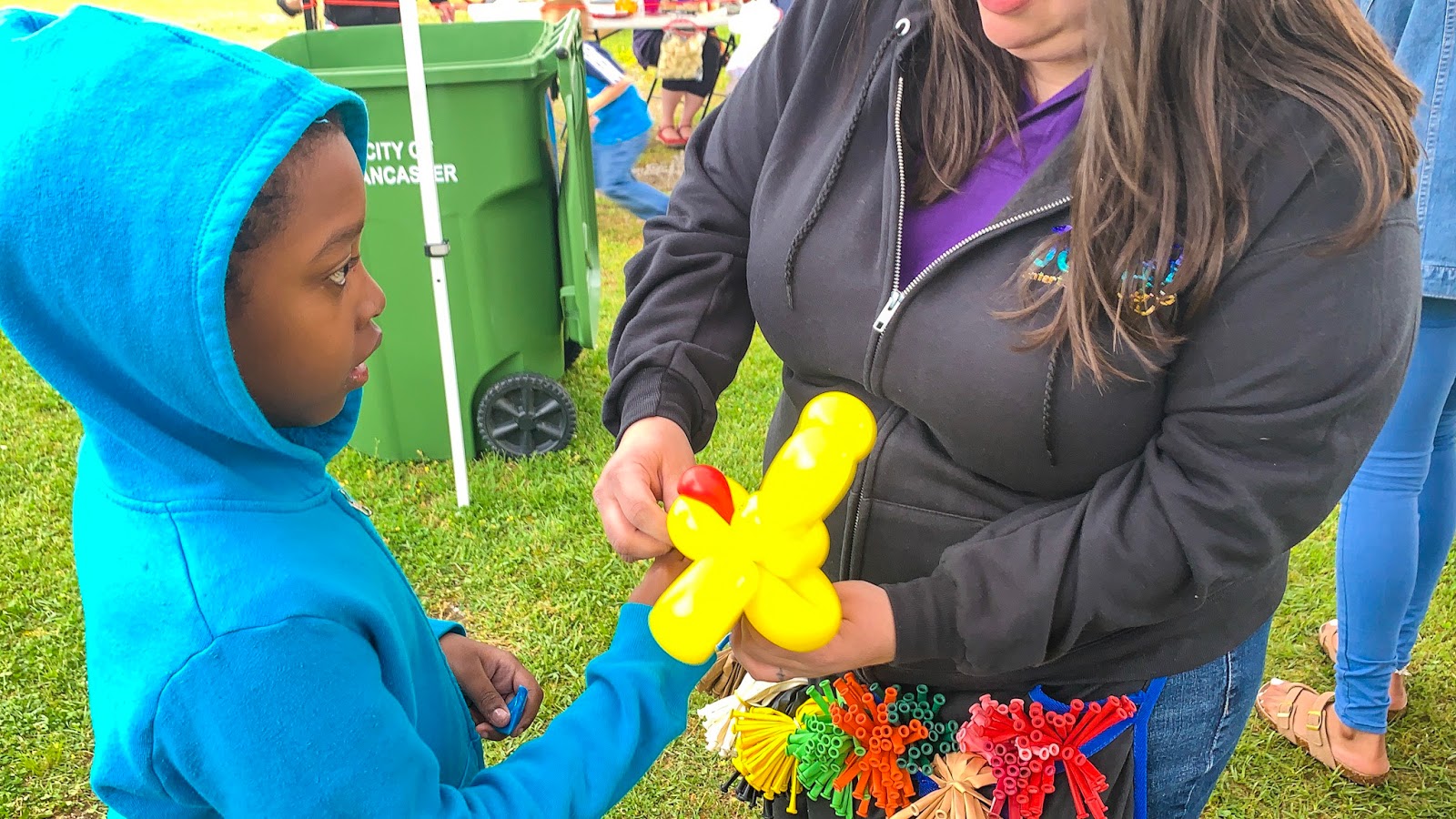 Let me tell y’all, I was just as mesmerized as my little guy looks in picture above.  I love watching balloon artists made their creations.  I mean their hands move so fast while they’re twisting and tugging those balloons this way and that way.  This is definitely a skill that I wish I had the patience the master.

Other Activities At Rosie’s Easter Bash 2019

So there were a few things that we bypassed this year.  The first was the bouncy houses.  If my memory serves me correct the bouncy houses that they had last year were bigger.  My kids are not fans of being in small enclosed spaces.  So they both nixed the bouncy houses.
Also, we passed on the Fire House experience this year.  So the Fire House is a mobile unit that they fire department uses to teach kids about how to safely put out fires as well as how to safely escape their homes in case of a fire as well as what to do if you can’t get out and have to hang tight until help arrives.  They stage a real fire with smoke from a smoke machine and kids get to learn how to climb out of a window.
Since I’ve been doing this experience since I was a kid in school, Moo’s done it 2 or 3 times already, and JJ has done it once, we decided to pass on doing it again.  There were some food trucks available but we passed due to our food allergy issues.
There was also some kind of sand art craft but by the time we got done with all the other things the kids really wanted to do they were packing up the table to go.  I don’t remember if there was a craft last year.  If so, we missed out on it then as well.
And as always, they had a great DJ and an amazing hostess.  They played some of my jams while were there but the kids threatened to disown me if I started dancing or singing along.  Y’all see how kids will try to suck away our fun but not their own?!  No worries next year, I’m inviting Grandma for backup.  She loves to get down in public, especially if they drop the Electric Slide.
Overall, we had an amazing time.  It was nice to get out of the house.  The kids are already asking what I think Rosie’s Easter Bash 2020 will look like.  Honestly, I’m just hoping that the weather is warmer and less wet.  Also, I will be prepared to get in on the egg hunt action as they give away prizes if you find one of the special eggs with a ticket inside.
If you celebrate Easter, what are some of your Easter traditions?
Family Life motherhood Rosie's Easter Bash South Carolina Travel

This site uses Akismet to reduce spam. Learn how your comment data is processed.